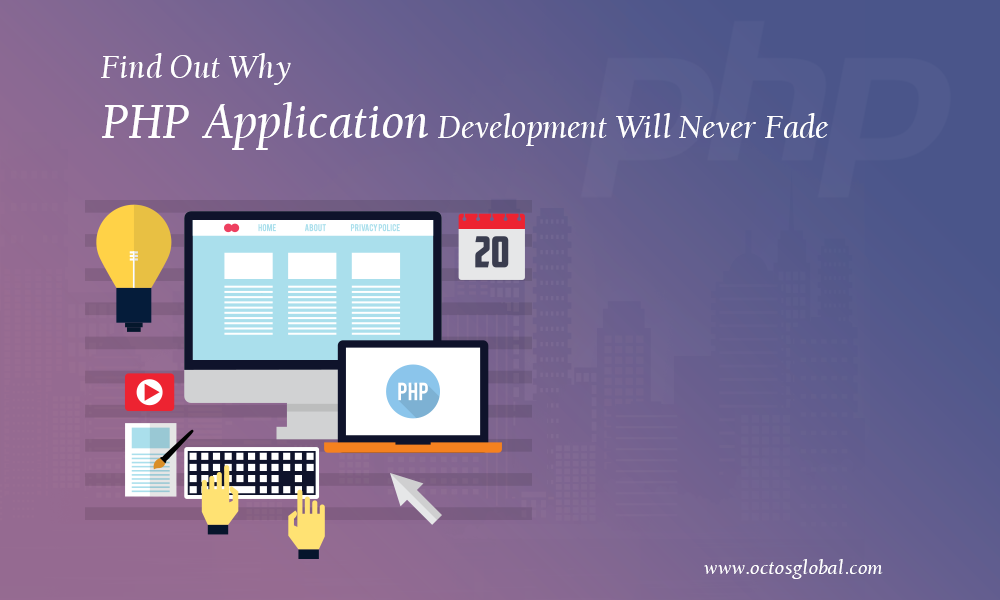 PHP Application Development Will Never Fade: Find Out Why

PHP has been one of the most popular languages solely created for web development purposes. The easy-to-use language can be customized and is thus extensively used to create websites that are loaded with advanced functionalities. With websites nowadays being more dynamic and efficient, the rise in popularity of PHP development services is eminent. Statistics show that 83% of websites use PHP as their server-side scripting language, which proves the fact of it being the top choice of web developers.

But then why is there a debate that the language will be discarded soon?

Let us learn a bit about the language first.

Development and Growth of PHP

Rasmus Lerdorf, the founder of PHP, started working for development of the language in 1994. The first phase consisted of a script toolset that Lerdorf called Personal Home Page. The toolset was released in public in June of 1995. A couple of years later, the second phase of PHP graduated from the Beta status and entered a wider public domain. The third and fourth phase included more developments, an official launch and 60,000 domains using the language. PHP also gained a new name, Hypertext Preprocessor, and it moved from single to multiple developers, thanks to Andi Gutmans and Zeev Suraski. They transformed PHP into giving a better run-time performance and numerous improvements.

July 2004 saw the release of PHP 5, which supported object oriented programming and other features for improved performance. The latest version is PHP 7 developed and released in 2015. This has huge performance improvements, better error handling and plenty features that makes this a top choice among web developers. Read more about the evolution of PHP here.

Reasons to choose PHP over others

Listed below are few of the many.

The consistent and continuous PHP web application development is because the developer community across the world is working to enhance its functions. The constant effort put in by the people ensures that PHP is in sync with the latest technology updates.

This is essential for a seamless performance. It can be executed on all operating systems without any hassle. It works flawlessly with Windows, LINUX, UNIX and Mac, along with Apache and MySQL. PHP being highly dynamic allows further extensions and plugins to help.

PHP based apps and websites are highly secure, the foundation being an encrypted language. It can be easily scaled and customized to a great extent taking it one step ahead than other languages. Being an open-source language, PHP gives the liberty to be combined or integrated with other graphic libraries and applications.

The language is easy to learn compared to other programming languages. The organized syntax and command functions do not require heavy training of new developers. The need of the hour is a fast website, and PHP web developers delivers on its promise. It can help develop a fast loading website even for a slow internet connection. Also, it is smooth when getting data from the database without taking too much time.

Relevance in the market for PHP

Now that we have established that PHP is better and faster than other programming languages, the question remains on how to stay relevant. As technology grows so will our needs, and automation will take over all boring and easy tasks. But what can be done to stay ahead and viable in the market?

The coding skills for HTML and PHP will become a fundamental skill for web developers, the introduction to basic syntax. The viability of a PHP outsource development will depend on how versatile they are in integrating it with the new technologies like AI, Blockchain, Cloud computing and more.

Consult us today and kickstart your project!